An American scholar and diplomat who helped Jewish refugees during the Holocaust, James G. McDonald, was honored by the U.S. embassy in Jerusalem last week—at the same time PBS was airing a new film about America’s response to the Holocaust which omitted any mention of McDonald.

The PBS documentary, “The U.S. and the Holocaust,” directed by the noted filmmaker Ken Burns, was six hours long, yet did not include any reference to McDonald, who helped arrange for visas to the United States for some 2,000 Jewish refugees. Burns and his staff have not responded to inquiries from journalists about the omission. 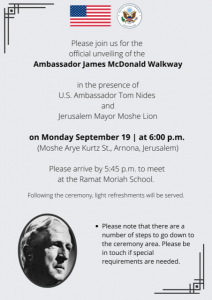 Invitation issued by the US Embassy in Jerusalem. Photo Credit: Courtesy of the David S. Wyman Institute for Holocaust Studies

The United States embassy in Jerusalem, by contrast, last week held a ceremony to mark the unveiling of the Ambassador James McDonald Walkway, near the embassy building. Speakers included Jerusalem Mayor Moshe Lion, U.S. embassy official Joseph Wierichs, and Shuli Eshel, director of the critically-acclaimed documentary film about McDonald, “A Voice Among the Silent: The Legacy of James G. McDonald.”

Wierichs said that McDonald, “unlike many of his contemporaries, tried to make a difference in what wound become a unique story of doom and destruction.”

Eshel, whose film inspired the embassy’s decision to honor McDonald, called him “a role model for human decency and courage that is as relevant today as it was 88 years ago. We need more James McDonalds in the world today.”

The son of Catholic immigrants to America, James McDonald was one of the first Americans to meet face to face with Hitler in 1933 and heard, first hand, the Nazi leader’s threats to annihilate the Jews. McDonald transmitted that warning to President Roosevelt and officials of the Vatican, but they were not interested.

From 1933 to 1935, McDonald served as the League of Nations Commissioner for Refugees from Germany. He resigned in protest against the refusal of the Roosevelt administration and other governments to take in Jewish refugees. According to McDonald’s diary, President Roosevelt promised that the U.S. would contribute $10,000 to support McDonald’s work, but never sent the funds.

In 1938, McDonald became chairman of a new body, the President’s Advisory Committee on Political Refugees, but soon discovered that President Roosevelt was not interested the committee’s advice. Nevertheless, McDonald’s constant pressure on the administration eventually helped bring about the approval of immigration visas for about 2,000 refugees. In the 1940s, McDonald made a number of speeches criticizing the administration’s policies toward Jewish refugees. 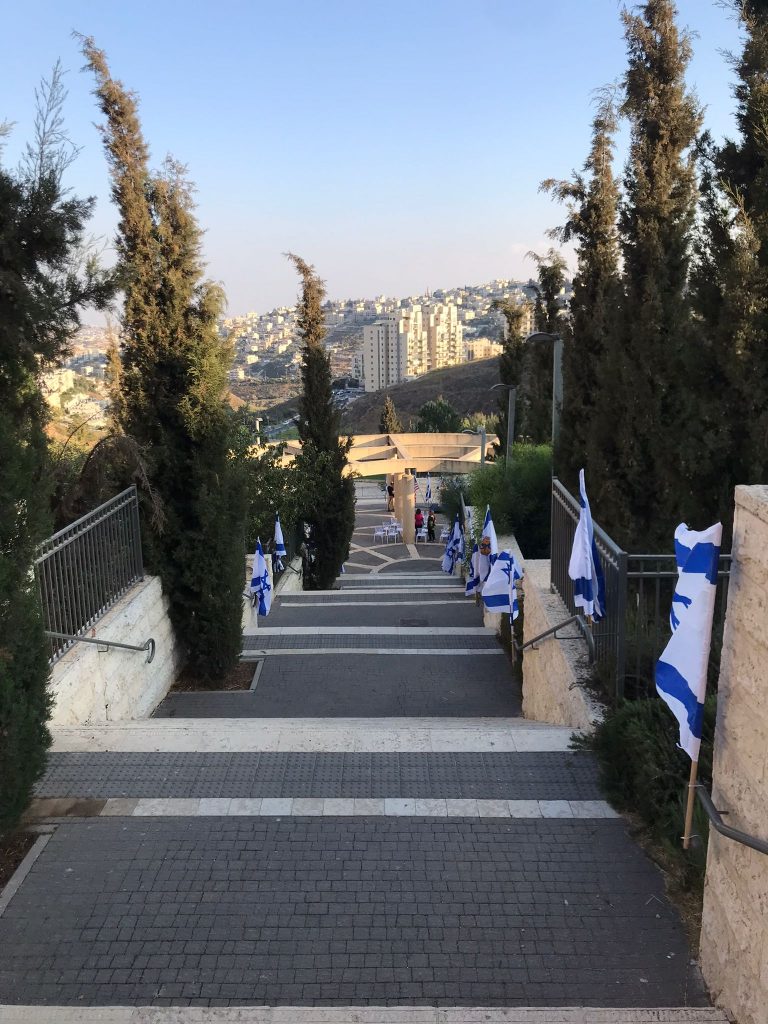 After the war, McDonald served on the Anglo-American Committee of Inquiry on Palestine, which tried to pressure the British to open Palestine to Holocaust survivors. In 1948, President Harry Truman appointed McDonald as America’s first U.S. Ambassador to Israel. Historians regard McDonald’s role as pivotal in aiding the new state and shaping American-Israeli friendship.

WHY WAS McDONALD CANCELED?

On March 24, 2014, Sara Bloomfield, director of the U.S. Holocaust Museum, wrote to McDonald’s daughter that the museum would “feature him in our upcoming exhibition on Americans and the Holocaust.” The co-curator of the exhibit, Daniel Greene, reiterated that promise to filmmaker Eshel in 2018, just before the exhibit was unveiled. But when the exhibit opened that year, it contained no mention of McDonald.

In response to protests, Greene said “limitations of space” made it impossible to include any mention of McDonald in the 5,000 square-foot exhibit. 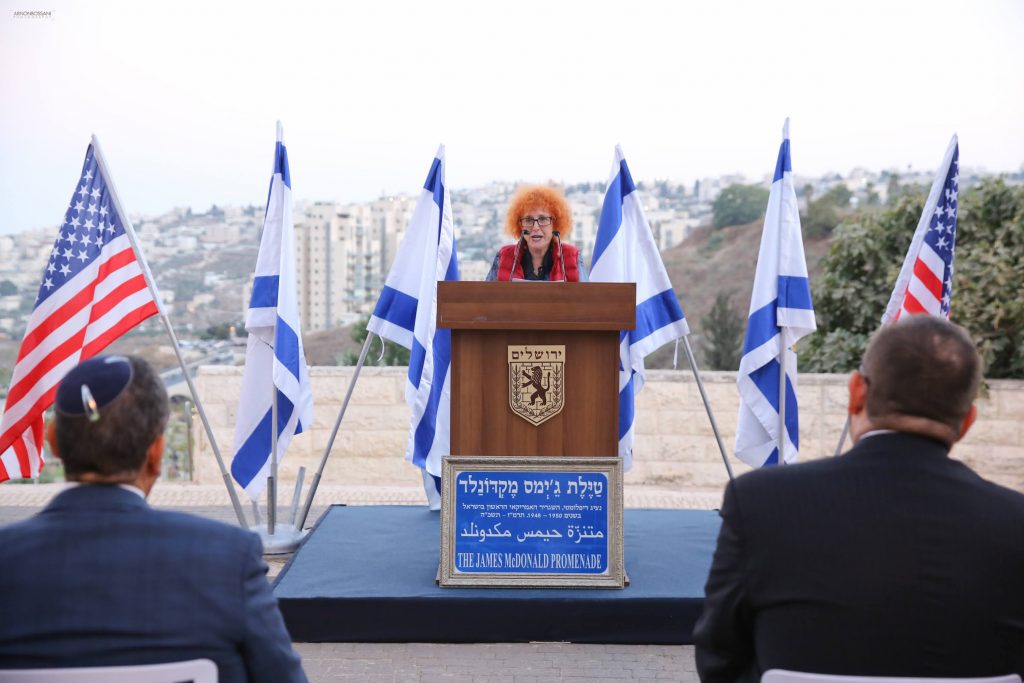 Filmmaker Eshel then sent a letter to museum director Bloomfield, co-signed by Shlomo Slonim, the James G. McDonald Professor of American History (Emer.) at Hebrew University; Haim Genizi, Professor of History (Emer.) at Bar-Ilan University, Israel, who was the author of the first published scholarship on James G. McDonald, in 1977; and Ayalah Rottenberg, who was the translator for Ambassador McDonald in his 1949 tour of Israeli kibbutzim. Bloomfield replied: “Danny [Greene] answered your question in his previous email to you…I believe this explains why we did not include this story in our exhibit.”

Dr. Rafael Medoff, director of the David S. Wyman Institute for Holocaust Studies, who has researched and written extensively about McDonald, expressed concern about both Burns’s omission of McDonald and the museum’s earlier exclusion of him. “Both Burns’s film and the exhibit minimize FDR’s responsibility for abandoning the Jews,” Medoff said. “McDonald challenged the Roosevelt administration’s policies—so omitting him from the film is consistent with the overall narrative of both the film and the exhibit. Such rewriting of history does a disservice to the memory of those, like James McDonald, who tried to help the Jews during that dark era.” 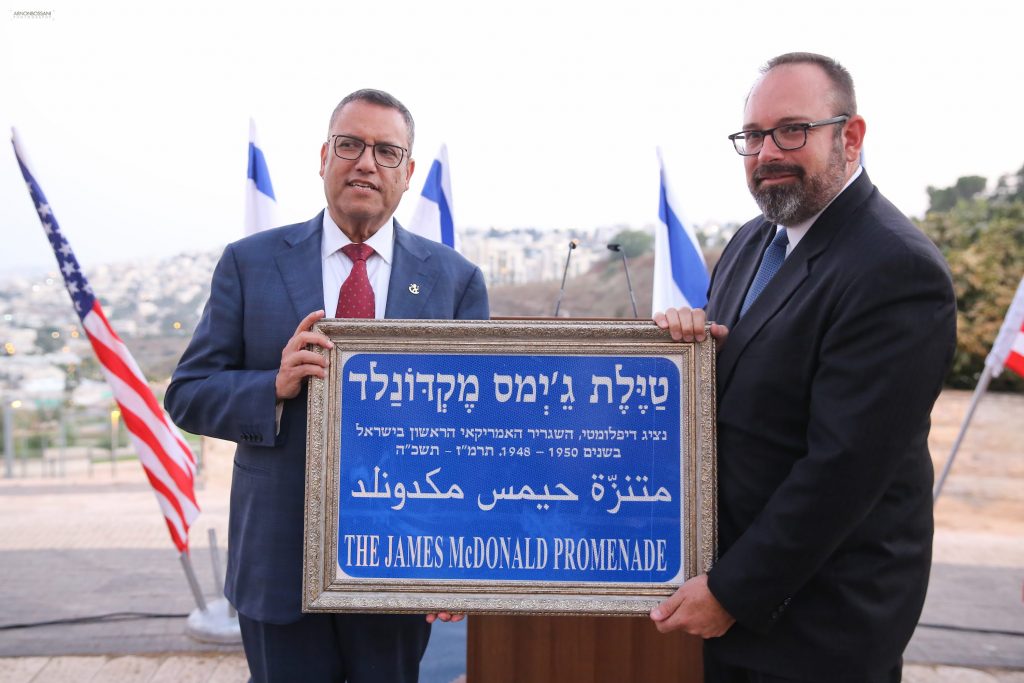