The simple 1,200 square-feet structure with a corrugated-iron roof has since August stood in the way of ambitions for the country’s first container transhipment port – a $900 million project that seeks to plug into the lucrative shipping trade flowing between juggernaut manufacturers in the East and wealthy consumer markets in the West.

Decorated with banners proclaiming “indefinite day and night protest”, the shelter provides cover for roughly 100 plastic chairs, although the number of protesters taking part in the sit-ins on any one day is usually much lower.

Across the street, supporters of the port including members of Prime Minister Narendra Modi’s ruling party and Hindu groups have set up their own shelters.

Even when protester numbers are low, up to 300 police officers with batons will gather nearby each day to carefully monitor the situation. Despite repeated orders by Kerala state’s top court that construction should proceed unhindered, the police are unwilling to take action against the protesters, fearful that doing so will set flame to social and religious tensions simmering over the port.

For Adani, the world’s third-richest person according to Forbes, it’s a high-stakes impasse with no apparent easy solution.

Reuters interviewed more than a dozen protesters as well as port supporters, police officials and reviewed hundreds of pages of filings in legal actions brought by the Adani conglomerate against the Catholic priests leading the protests and against the state government. All point to an intractable divide.

Protest leaders allege construction of the port since December 2015 has resulted in significant erosion of the coast and further building promises to wreak havoc with the livelihood of a fishing community they say numbers some 56,000.

They want the government to order a halt to construction and independent studies on the impact of the port’s development on the marine ecosystem.

The Adani conglomerate plans to send heavy vehicles to the port on Friday after the court this week said vehicle movement should not be blocked. In October, vehicles that tried to exit the port had to turn back.

Eugine H. Pereira, vicar general of the archdiocese leading the protesters, said they would not be removing the shelter despite the court order.

“We are willing to be arrested in large numbers if need be,” he told Reuters.

Adani Group said in a statement the project is in full compliance with all laws and that many studies conducted by the Indian Institute of Technology and other institutions in recent years have rejected allegations relating to the project’s responsibility for shoreline erosion.

“In light of these findings by independent experts and institutions, we feel that the ongoing protests are motivated and against the interests of the state and the development of the port,” it said.

The Kerala state government, which has been in talks with protesters and argues that erosion has occurred due to cyclones and other natural disasters, did not respond to a request for comment.

Adani, whose empire spans gas and power projects as well as a ports and logistics business valued at some $23.5 billion, has described Vizhinjam as an “unmatched location” on one of the world’s main shipping routes. As a transhipment port, it would be well-positioned to grab business from Sri Lanka – where arch-rival China has invested heavily in port infrastructure – as well as from Singapore and Dubai.

With transhipment, containers are transferred from mainline vessels on key trade routes to smaller, feeder vessels on other trade lanes – creating a hub-and-spoke network that is more economical and flexible than relying on point-to-point shipping.

Eager to get on with plans to complete the first phase of construction by December 2024, the Adani conglomerate has sued the Kerala government for police inaction.

But Prakash R, a senior police officer in charge of security outside the port, said his aim is to avoid a situation like the 2018 environmental protests against a Vedanta (VDAN.NS) copper smelter in neighbouring Tamil Nadu state that resulted in 13 deaths and the smelter’s closure.

“We are holding back from using forces to avoid any untoward incidents. What if someone threatens or commits suicide? All hell will break loose.”

“We can’t rule out the possibility of this spiralling into communal tensions. We are strategically positioned between the two sides to prevent any such incident,” he added.

Each day, the protesters and port supporters blare music from loudspeakers and chant slogans. Prakash R describes the situation as a standoff between “people of the sea”, who are mostly Christian and make their living from fishing and “people of the land” who are predominantly Hindu.

The fishing community erected the shelter after years of failed efforts to get the Kerala government to intervene while watching the coast steadily erode. An easing of the pandemic also made it easier than previous years to protest.

Protesters say the construction has reduced the size of their catches and if the port is completed they’ll be forced to fish much further out to sea.

A group of 128 residents from the fishing community near the port has also sued the Vizhinjam unit of Adani Ports and Special Economic Zone Ltd (APSE.NS) as well as the Kerala government, claiming dredging and other construction work has caused erosion that is destroying their homes.

Following protesters’ demands, the state last month set up a panel to study coastal erosion at the site.

Adani Group said in its statement that India’s National Green Tribunal, which has been monitoring the impact of the project, has not found any environmental or social violations.

For their part, pro-construction supporters at their shelters accuse the protesters of impeding progress.

“This is a matter of providing jobs to the many localities here,” said Mukkola G Prabhakaran, a Kerala state council member in Modi’s Bharatiya Janata Party.

The Indian protests recall the backlash Adani faced in Australia over his Carmichael coal mine. There, activists concerned about carbon emissions and damage to the Great Barrier Reef forced Adani to downsize production targets and delayed the mine’s first coal shipment by six years.

In Kerala, the Adani conglomerate which is shouldering a third of the project’s cost with the rest borne by the state and federal governments has repeatedly sought relief from the state’s court.

In filings, it has claimed the protests have caused “immense loss” and “considerable delay” to the project, adding that protesters have warned port officials of “dire consequences” and pose a “constant and continuous militant” threat.

An Oct. 27 “land and sea protest” saw protesters burn a fishing boat and more than 1,500 people break into the port’s grounds with some carrying iron rods to the main gate, according to the filings.

Asked about the claim, Pereira said: “We do not endorse or promote any sort of violence. Our protests have been peaceful all along.”

Accusing the Kerala state police of being “mute spectators”, the Adani conglomerate has also called for federal police to be brought in. The court’s next hearing on Adani’s complaints is slated for Monday.

For the time being, the tense standoff continues, with protesters saying they can congregate quickly if police move to dismantle the shelter. The site has four CCTV cameras providing a live feed so protest leaders can keep tabs on the situation with their phones.

“We’re prepared to go to any lengths to protect our livelihood. It’s a matter of do or die,” says Joseph Johnson, a protesting fisherman. 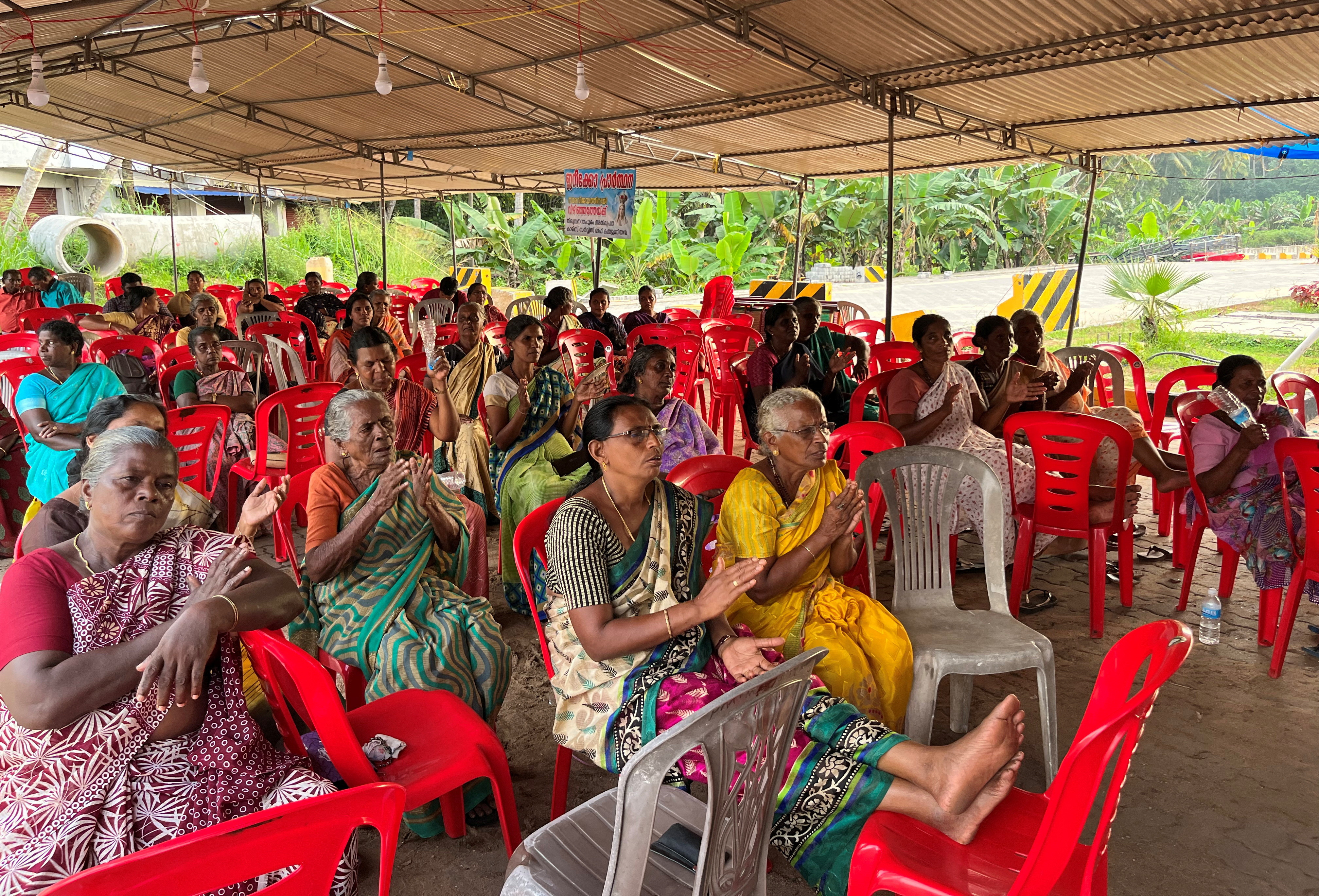 Women from a fishing community attend a protest against the construction of the proposed Vizhinjam Port in the southern state of Kerala, India, November 9, 2022. REUTERS/Munsif Vengattil 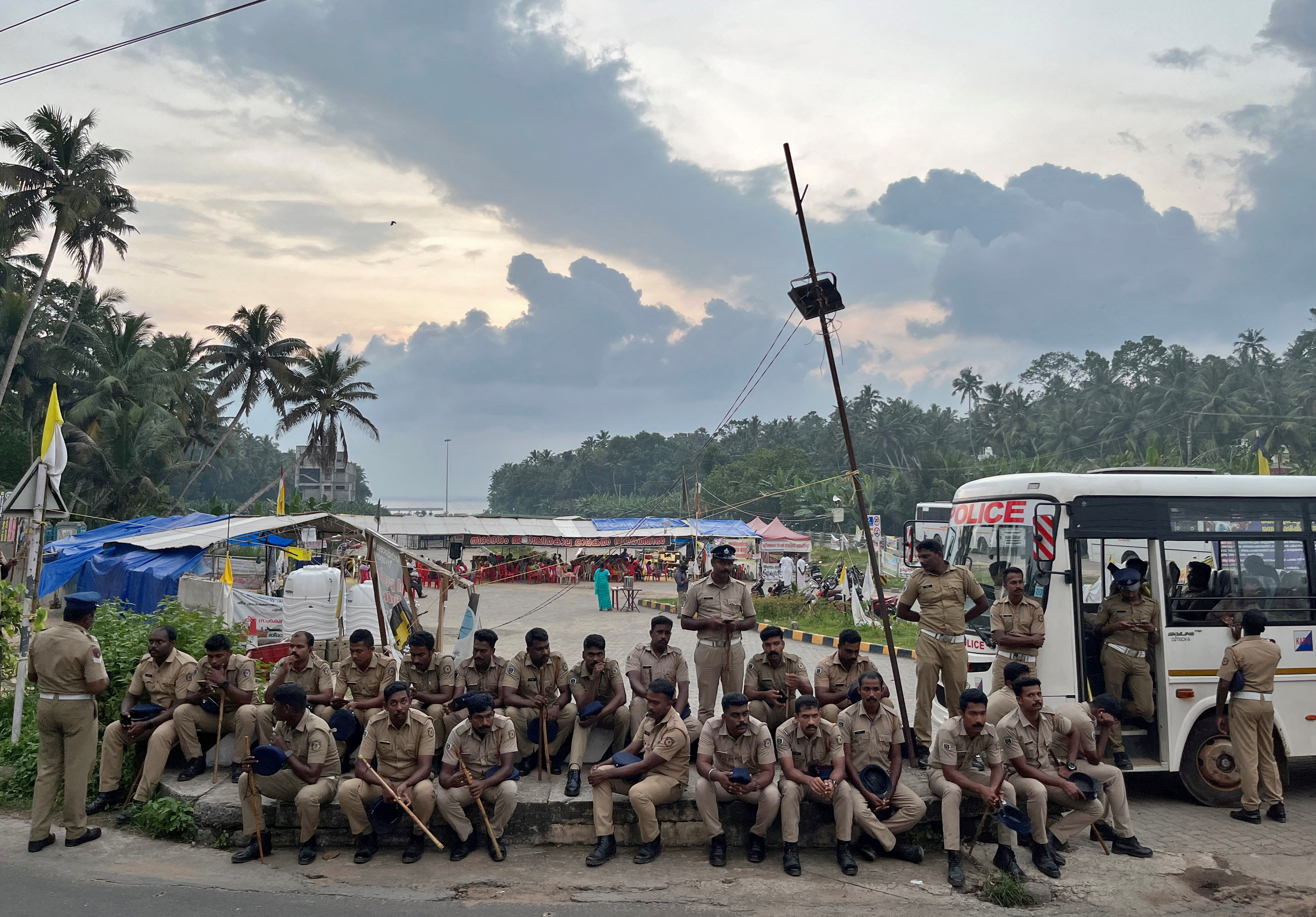 Police officers are deployed as fishermen protest near the entrance of the proposed Vizhinjam Port in the southern state of Kerala, India, November 9, 2022. REUTERS/Munsif Vengattil 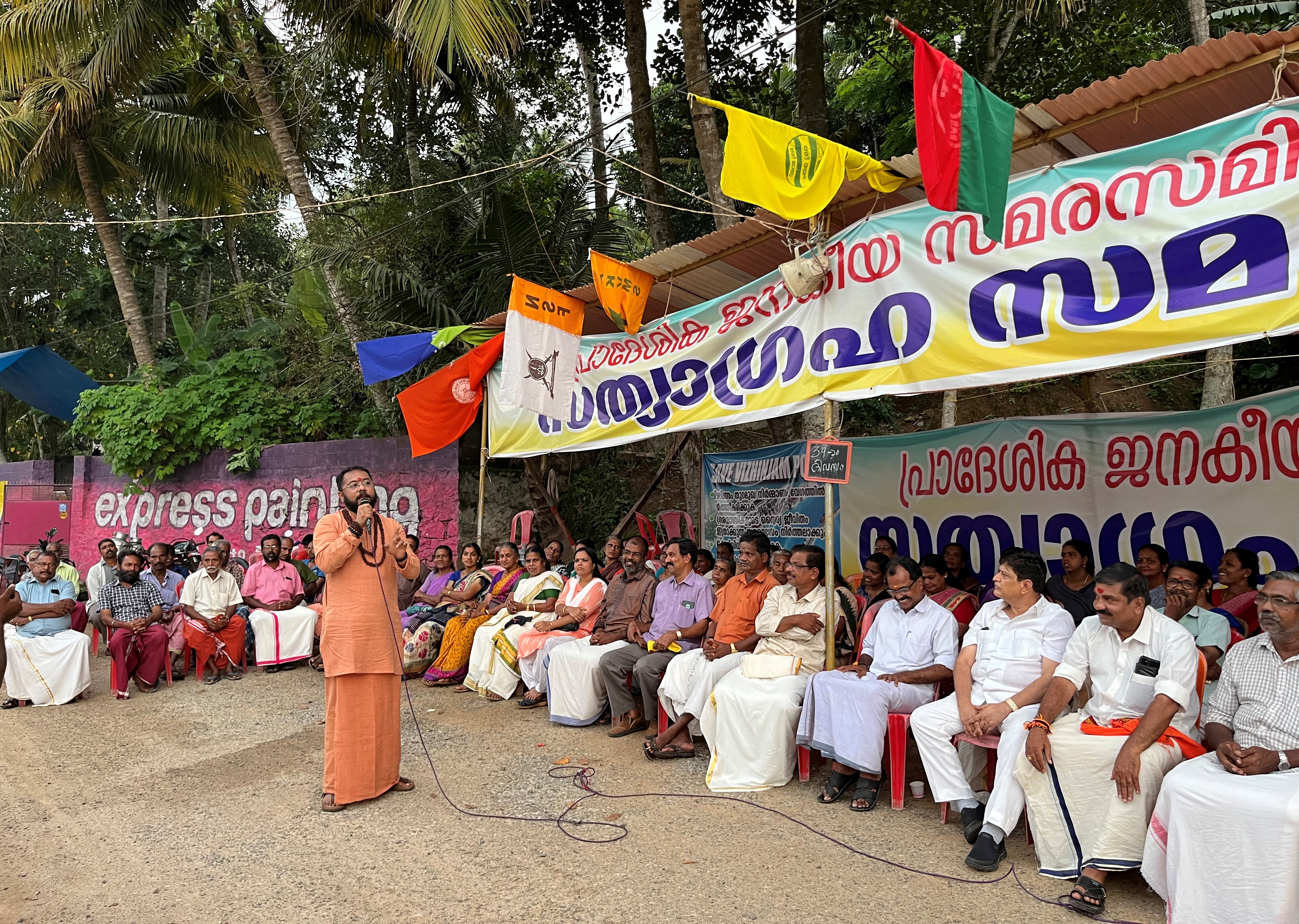 A Hindu priest addresses people who gathered to support the construction of the proposed Vizhinjam Port in the southern state of Kerala, India, November 9, 2022. REUTERS/Munsif Vengattil 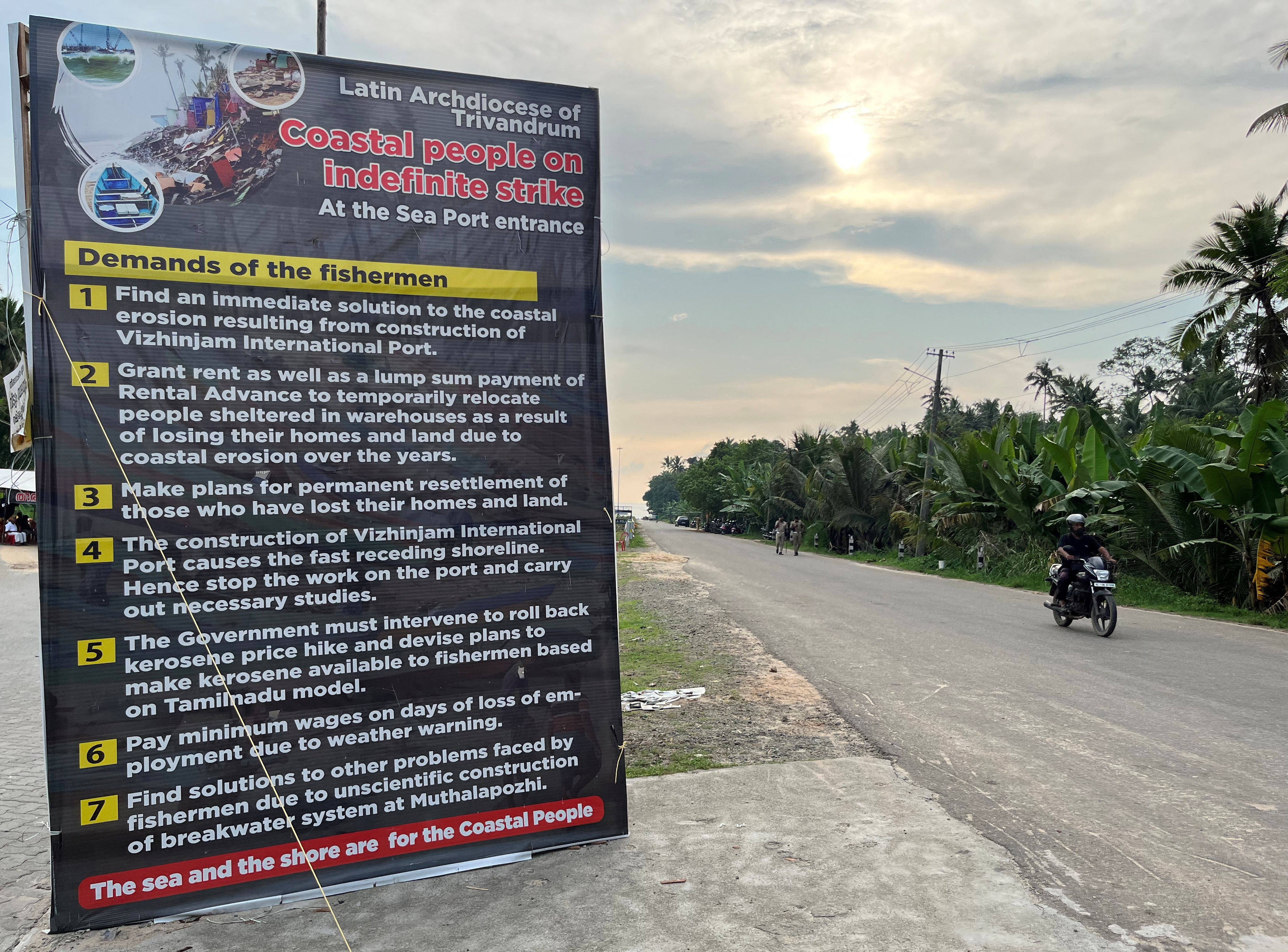 A motorcyclist moves past a placard featuring the demands of protesting fishermen near the entrance of the proposed Vizhinjam Port in the southern state of Kerala, India, November 9, 2022. REUTERS/Munsif Vengattil 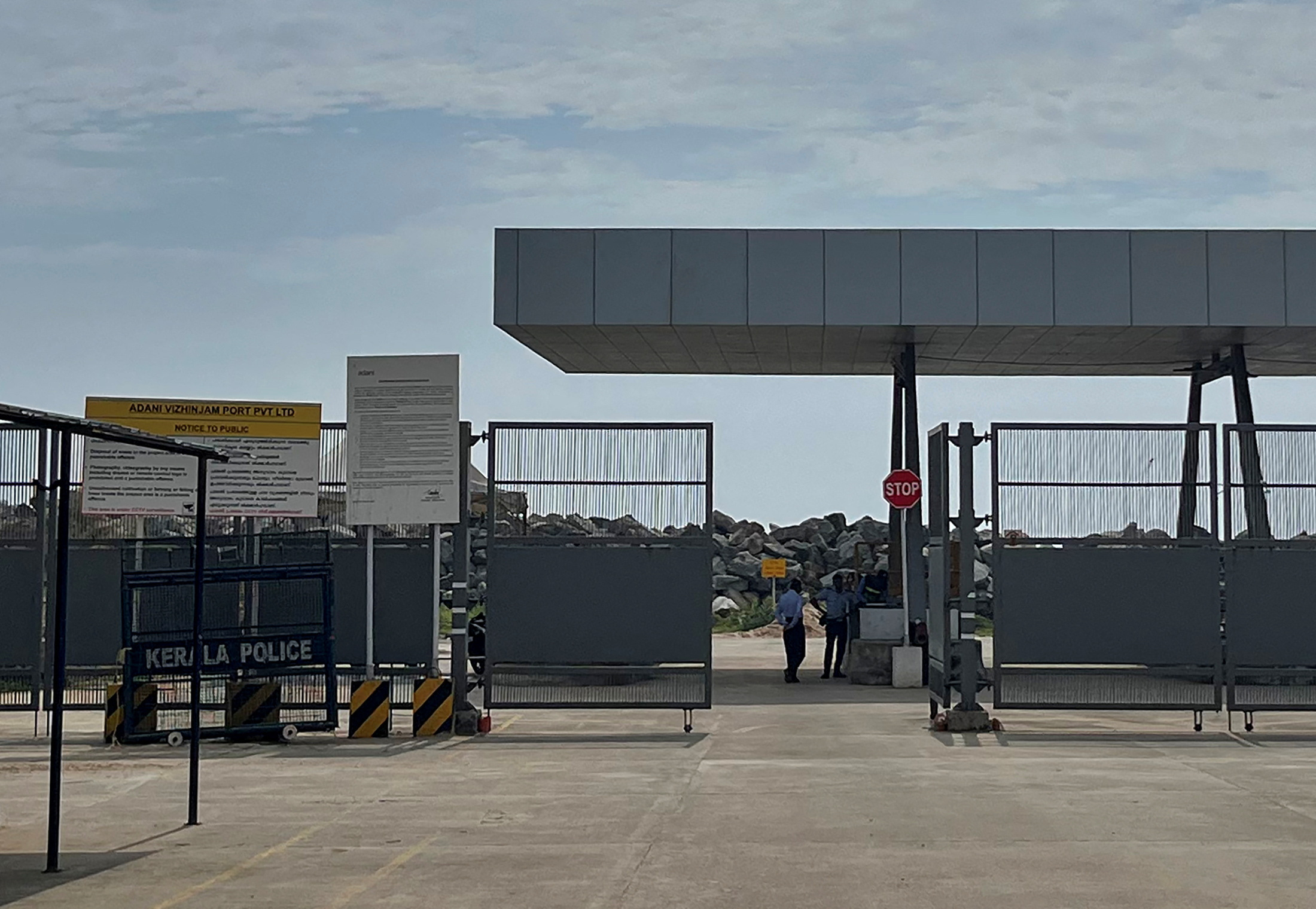