KYIV (Reuters) -Russia rained down missiles across Ukraine on Wednesday, forcing shutdowns of nuclear power plants and killing civilians as Moscow pursues its campaign to plunge Ukrainian cities into darkness and cold as winter sets in. 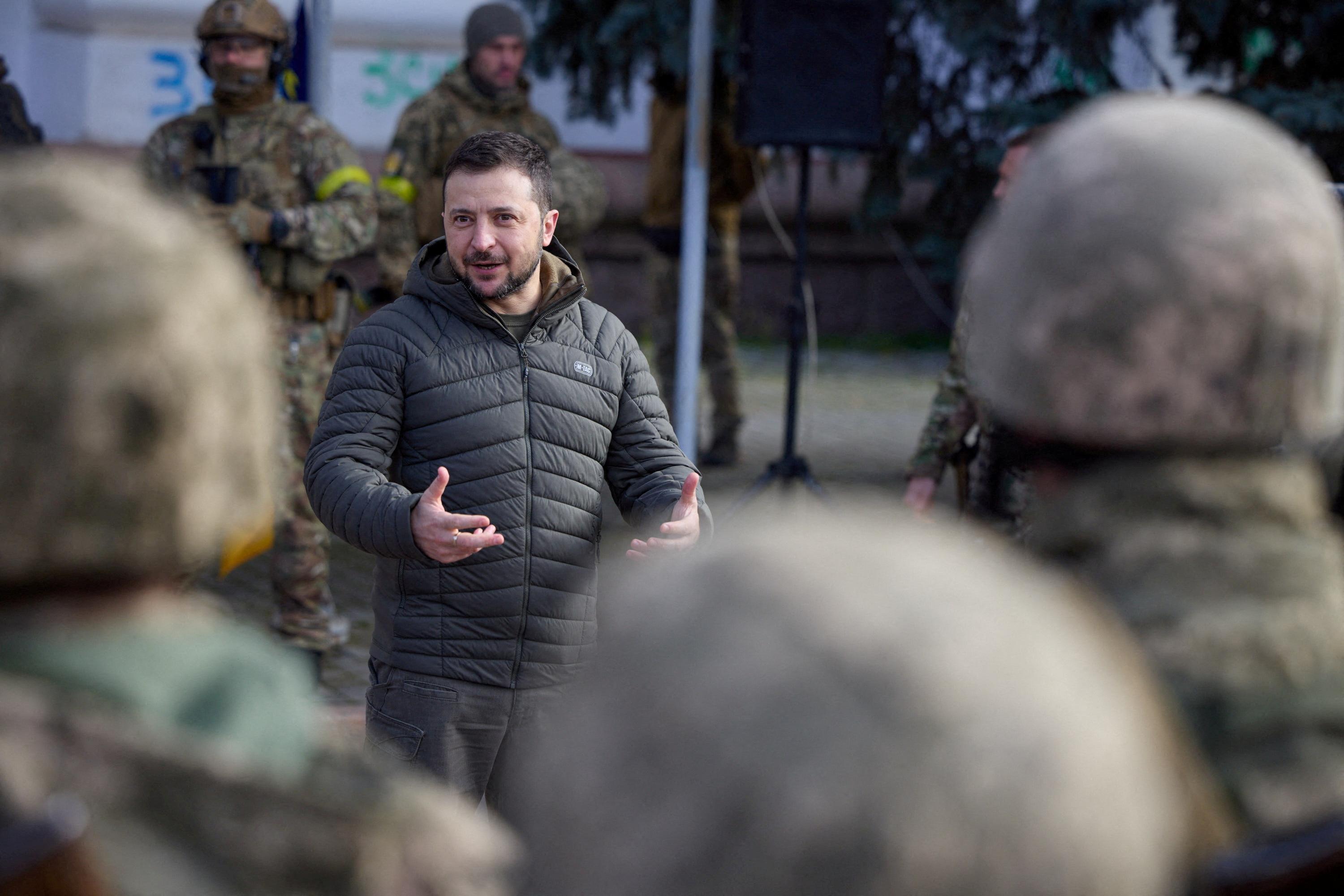 Officials across the border in Moldova said electricity was also lost to more than half of their country, the first time a neighbouring state has reported such extensive damage from the war in Ukraine triggered by Russia’s invasion nine months ago.

A blackout forced the shutdown of reactors at the Pivdennoukrainsk nuclear power plant in southern Ukraine, and the Khmelnitskyi and Rivne plants in the west, the state-run nuclear energy firm Energoatom said.

Air raid sirens blared across Ukraine in a nationwide alert. Explosions could be heard on the outskirts of Kyiv, which was pitched into darkness. City officials said one person was killed and another wounded in a two-storey building that was struck.

Earlier, Russian missiles hit a maternity hospital in the southern Zaporizhzhia region overnight, killing a baby, the regional governor said on the Telegram messaging service. Blasts were also reported in other cities, where further information about casualties was not immediately available.

Since October, Russia has openly acknowledged targeting Ukraine’s civil power and heating systems with long-range missiles and drones. Moscow says the aim is to reduce Kyiv’s ability to fight and push it to negotiate; Ukraine says the strikes on infrastructure are a war crime, deliberately intended to harm civilians to break the national will.

Moldova, like Ukraine a former Soviet republic once dominated by Moscow, has long worried about the prospect of fighting spreading across its borders.

“Massive blackout in Moldova after today’s Russian attack on Ukraine’s energy infrastructure,” Deputy Prime Minister Andrei Spuni said on Twitter, adding the grid operator was trying to reconnect “more than 50% of the country to electricity”.

Moldova, which shares a language with neighbouring NATO member Romania, has a pro-Western government that aims to join the European Union. Russian troops have occupied a breakaway sliver of Moldova along the Ukrainian border claimed for 30 years by pro-Russian separatists.

With the first snow of Ukraine’s generally frigid winter falling, authorities worry about the impact of power cuts affecting millions of people.

In an overnight video address, President Volodymyr Zelenskiy announced special “invincibility centres” would be set up around Ukraine to provide electricity, heat, water, internet, mobile phone connections and a pharmacy, free of charge and around the clock.

The attacks on Ukrainian energy facilities follow a series of Russian battlefield setbacks, culminating this month in a retreat from the southern city of Kherson to the east bank of the Dnipro River that bisects the country.

A week after Kherson was retaken by Ukrainian forces, residents were tearing down Russian propaganda billboards and replacing them with pro-Ukrainian signs.

“The moment our soldiers entered, these posters were printed and handed over to us. We found workers to install the posters, and we clean off the advertisement as quickly as possible,” said Antonina Dobrozhenska, who works at the government’s communications department.

Russia has been battering Ukraine with expensive long-range cruise missiles and cheap Iranian-made drones. Britain’s Defence Ministry said on Wednesday there had been no public reports of Russia using Iranian one-way attack drones since around Nov. 17 – a sign, it said, that Moscow might be running out of them, and would try to obtain more.

Battles raged in the east, where Russia is pressing an offensive along a stretch of front line west of the city of Donetsk, which has been held by its proxies since 2014. The Donetsk region was the scene of fierce attacks and constant shelling over the past 24 hours, Zelenskiy said.

European officials were debating the details of a global price cap on Russian oil, a U.S.-backed proposal taken up by the G7 group of big economies and set to come into effect on Dec. 5 with the intent of limiting Moscow’s ability to fund the war.

While Western sanctions mean Russian seaborne crude is now mostly sold in Asia, the trade still involves European shippers and insurers, who would be barred from transporting cargoes above the capped price. Ambassadors from the 27 EU countries were discussing the G7 proposal with the aim of reaching a common position by the end of the day.

A European diplomat said the price cap being discussed would be in the $65-70 per barrel range. Russia’s Urals crude blend already trades at around $70 a barrel, a steep discount to other benchmarks, as a result of sanctions.

The European Parliament passed a resolution on Wednesday declaring Russia a state sponsor of terrorism, although the move is largely symbolic as the EU lacks a framework to take practical action in response.

Moscow says it is carrying out a “special military operation” to protect Russian speakers in what President Vladimir Putin calls an artificial state carved from Russia. Ukraine and the West call the invasion an unprovoked land grab.

Western responses have included financial and military aid for Kyiv – it received 2.5 billion euros ($2.57 billion) from the EU on Tuesday and is expecting $4.5 billion in U.S. aid in coming weeks – and waves of punitive sanctions on Russia.

The BBC reported Britain is sending three helicopters to Ukraine, the first piloted aircraft it has sent since the war began. Ukraine will deploy them with Ukrainian crews trained in Britain, it said.