Listen to this article
2023-01-25T01:13:17Z
Several high-ranking officials in the Ukrainian government have been dismissed or resigned from their posts, coinciding with corruption allegations including sports cars and a Spanish vacation. President Zelenskiy’s administration is saying that the moves shows the leader is in tune with his citizen’s priorities. Matthew Larotonda reports.

The United States was expected to announce as soon as Wednesday that it will send heavy tanks to Ukraine, and Germany has decided to do the same, sources said, a reversal that Kyiv has said would reshape its war with Russia.

Hours before Ukrainian President Volodymyr Zelenskiy turned 45 on Wednesday, he pressed allies to move forward with providing his forces with more than five to 15 modern tanks.

“Discussions must be concluded with decisions,” Zelenskiy said in his nightly video address. “Decisions on real strengthening of our defence against terrorists. Allies have the required number of tanks.”

Just days after arguing against granting Kyiv’s requests, Washington was ready to start a process that would eventually send M1 Abrams battle tanks to Ukraine, two U.S. officials told Reuters on Tuesday. A third official said the U.S. commitment could total about 30 tanks delivered over the coming months.

Meanwhile, German Chancellor Olaf Scholz had decided to send Leopard 2 battle tanks to Ukraine and allow other countries such as Poland to do so as well, two sources familiar with the matter told Reuters.

Spiegel magazine, which first reported the news, said Germany was planning to supply at least one company of Leopard 2 A6 tanks, which usually comprises 14 tanks. Other allies, in Scandinavia for example, intend to go along with Germany in supplying their Leopard tanks to Kyiv, the magazine reported.

While there was no official confirmation from Berlin or Washington, officials in Kyiv hailed what they said was a potential gamechanger on the battlefield in a war that is now 11 months old – even if the rumoured tank numbers fell short of their hopes.

“A few hundred tanks for our tank crews …. This is what is going to become a real punching fist of democracy,” Andriy Yermak, the head of Zelenskiy’s administration, wrote on Telegram.

Kyiv has pleaded for months for Western tanks that it says would give its forces the firepower and mobility to break through Russian defensive lines and recapture occupied territory in the east and south. Germany has held back, wary of moves that could cause Moscow to escalate.

Front lines in the war, which stretch more than 1,000 kilometres (620 miles) through eastern and southern Ukraine, have been largely frozen for two months despite heavy losses on both sides. Russia and Ukraine are both widely believed to be planning new offensives.

Zelenskiy said on Tuesday night that Russia was intensifying its push toward Bakhmut, an industrial town in eastern Ukraine that has been the focus of intense fighting. “They want to increase the pressure on a larger scale,” he said.

Whether to supply Ukraine with significant numbers of heavy modern battle tanks has dominated discussions among Kyiv’s Western allies in recent days.

The Kremlin has said supplying tanks to Ukraine would not help and that the West would regret its “delusion” that Kyiv could win on the battlefield.

Berlin has been pivotal because the German-made Leopards, fielded by some 20 armies around the world, are widely seen as the best option. The tanks are available in large numbers and easy to deploy and maintain.

While the U.S. Abrams tank is considered less suitable due to its heavy fuel consumption and difficulty to maintain, a U.S. move to send them to Ukraine could make it easier for Germany – which has called for a united front among Ukraine’s allies – to allow the supply of Leopards.

Russian President Vladimir Putin casts the “special military operation” that began when his troops invaded Ukraine on Feb. 24 last year as a defensive and existential battle against an aggressive and arrogant West.

Ukraine and the West call Russia’s actions an unprovoked land grab to subdue a fellow former Soviet republic that Moscow regards as an artificial state.

Separately on Tuesday, Ukraine dismissed more than a dozen senior officials as part of an anti-corruption drive made more critical by the need to keep its Western backers onside.

The European Union, which offered Ukraine the status of candidate member last June, welcomed the development.

Among Ukrainian officials who resigned or were dismissed were the governors of the Kyiv, Sumy, Dnipropetrovsk, Kherson and Zaporizhzhia regions, the latter three frontline provinces. Kyiv and Sumy were major battlefields earlier in the war.

Some, though not all, of the officials who left had been linked to corruption allegations.

Ukraine has a history of graft and shaky governance, and is under international pressure to show it can be a reliable steward of billions of dollars in Western aid. 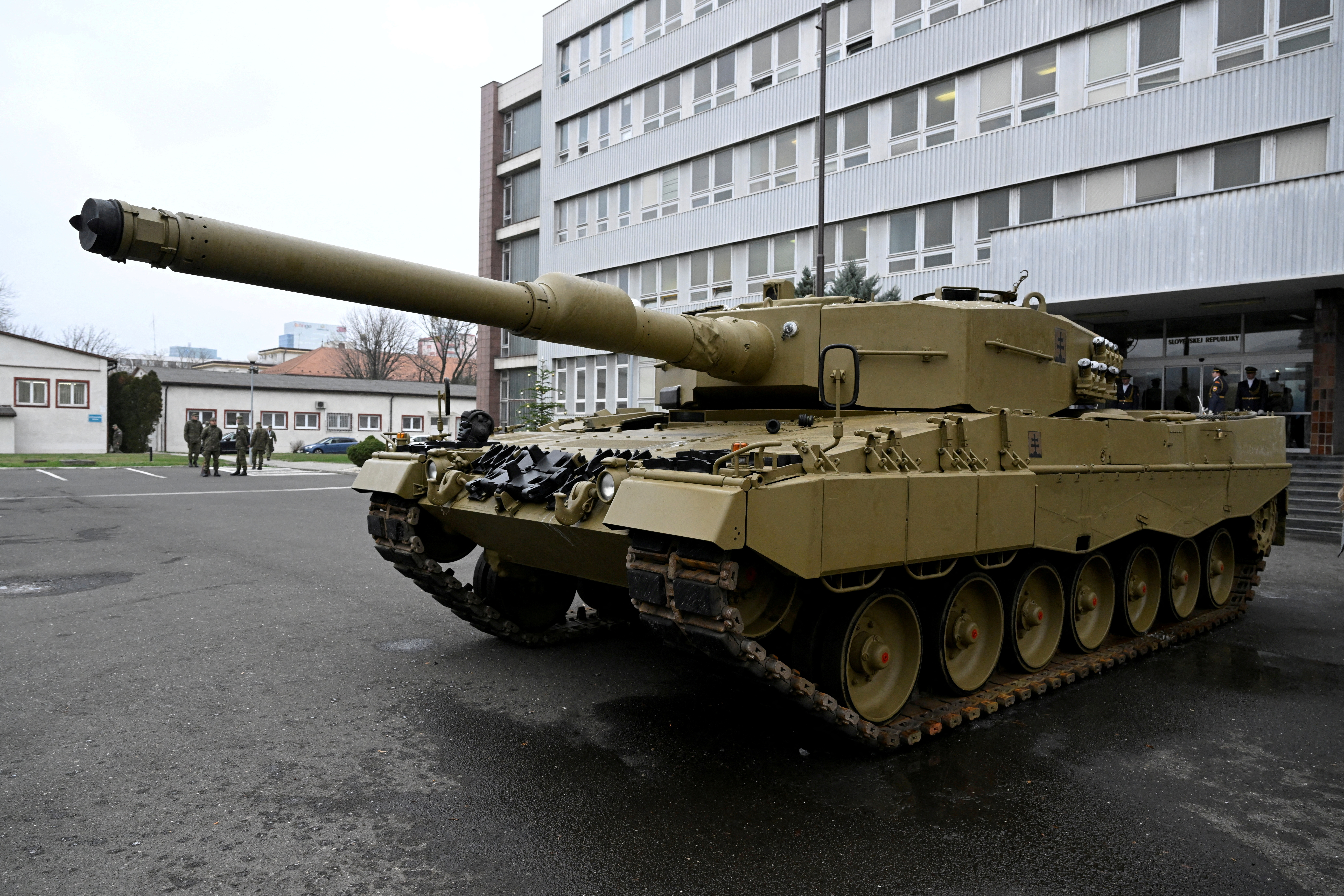 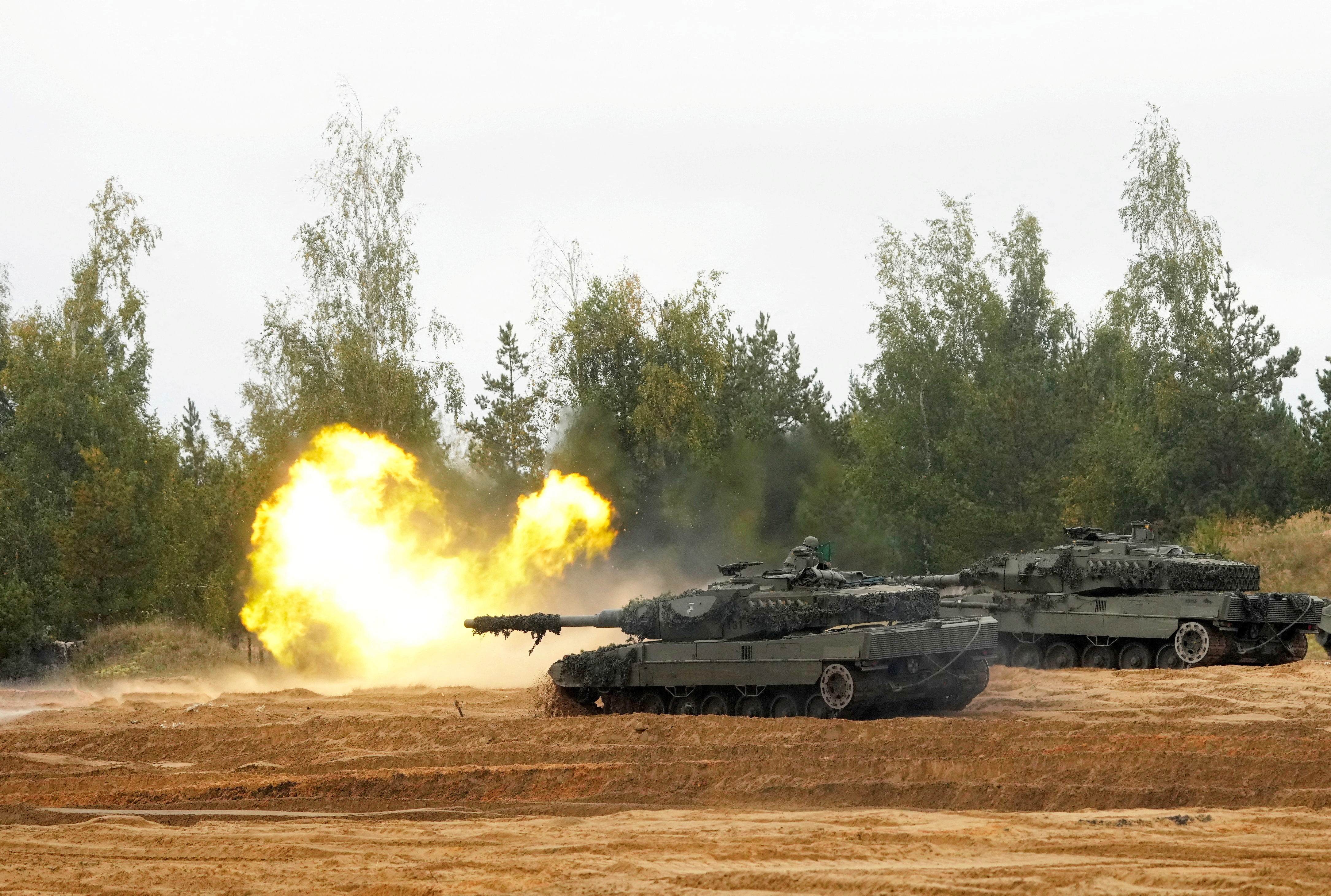 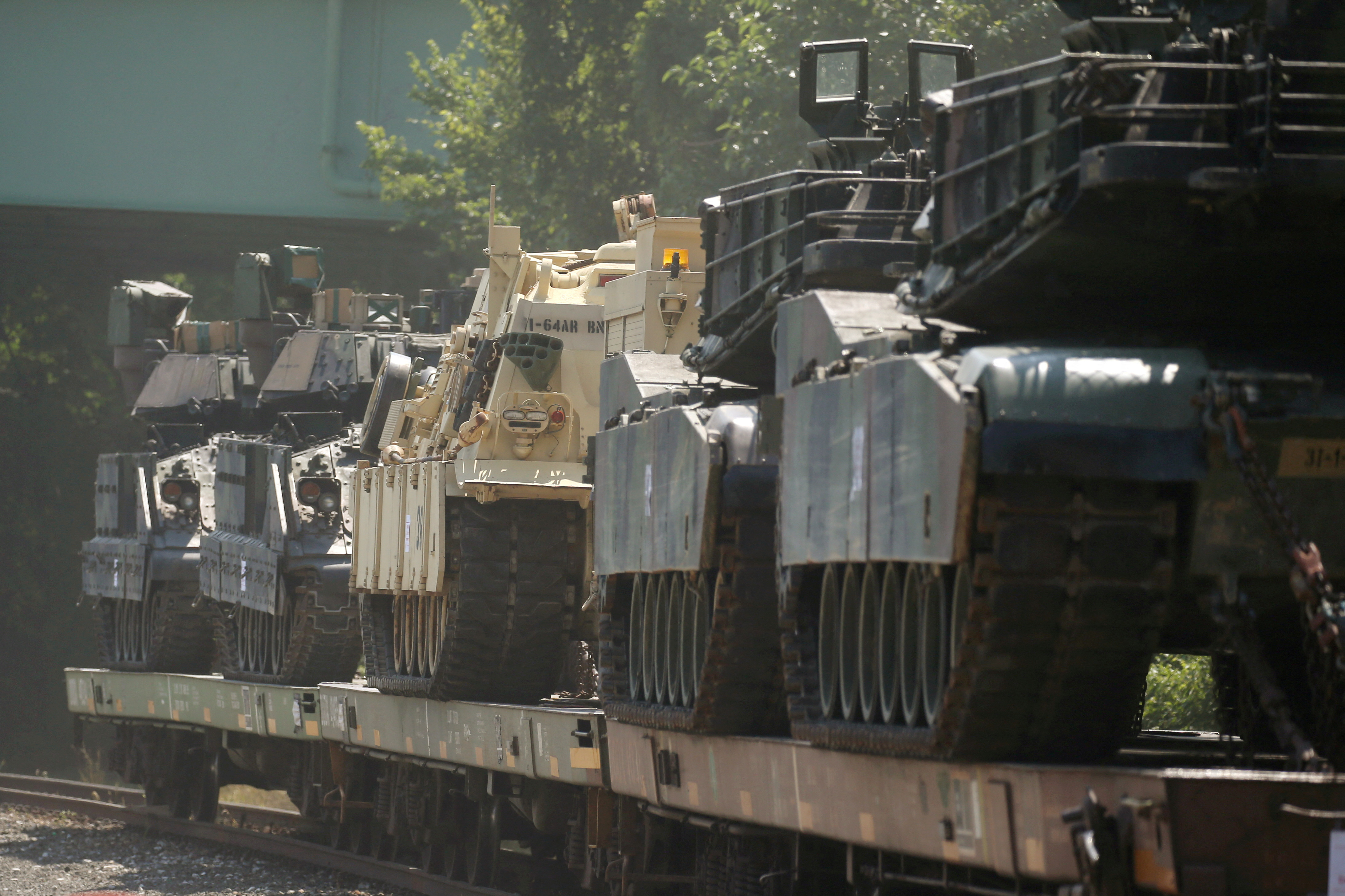 M1 Abrams tanks and other armored vehicles sit atop flat cars in a rail yard after U.S. President Donald Trump said tanks and other military hardware would be part of Fourth of July displays of military prowess in Washington, U.S., July 2, 2019. REUTERS/Leah Millis/File Photo 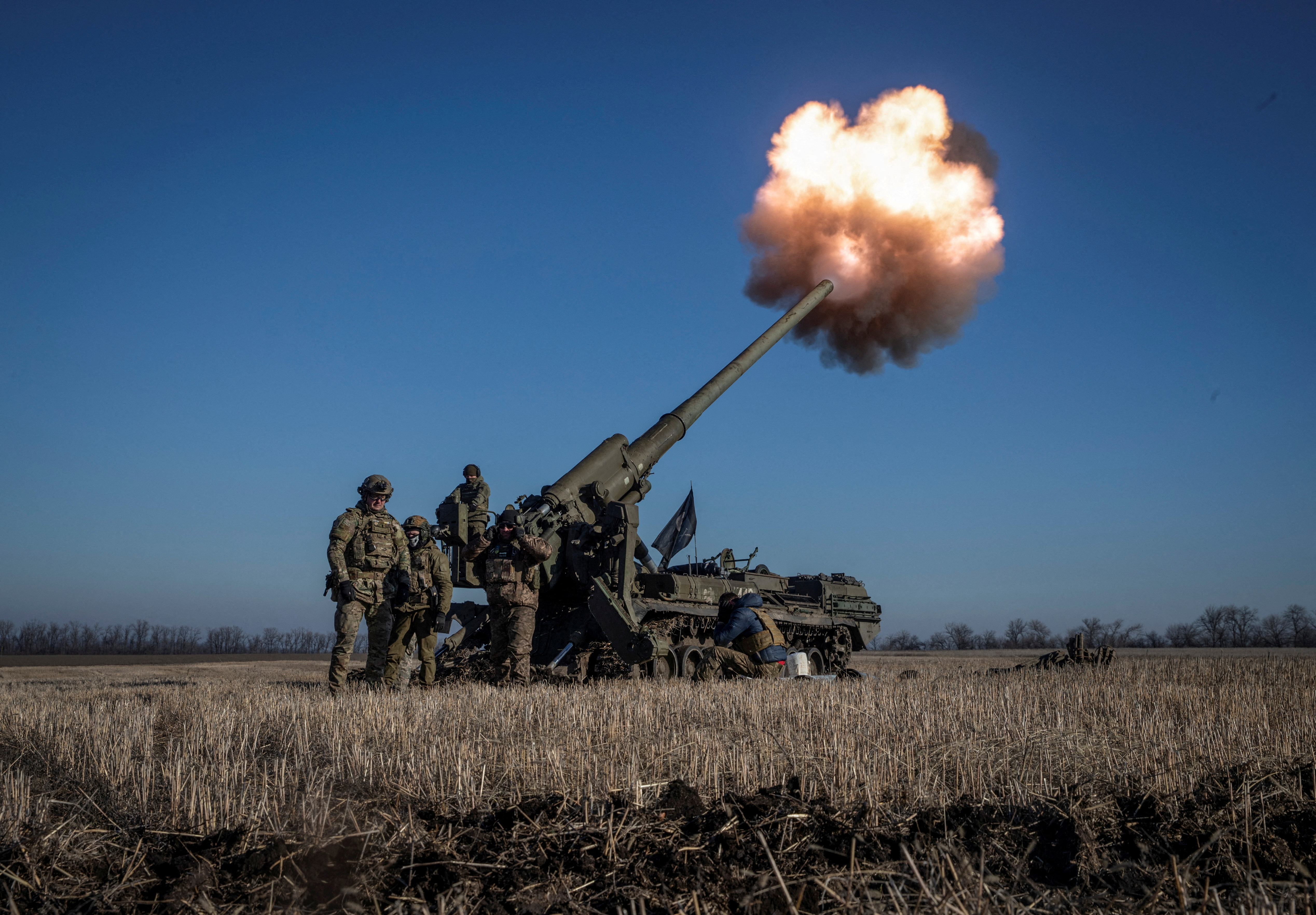 Ukrainian servicemen fire a 2S7 Pion self-propelled gun toward Russian positions, amid Russia’s attack on Ukraine, on a frontline near Bakhmut in Donetsk region, Ukraine January 24, 2023. REUTERS/Oleksandr Ratushniak TPX IMAGES OF THE DAY 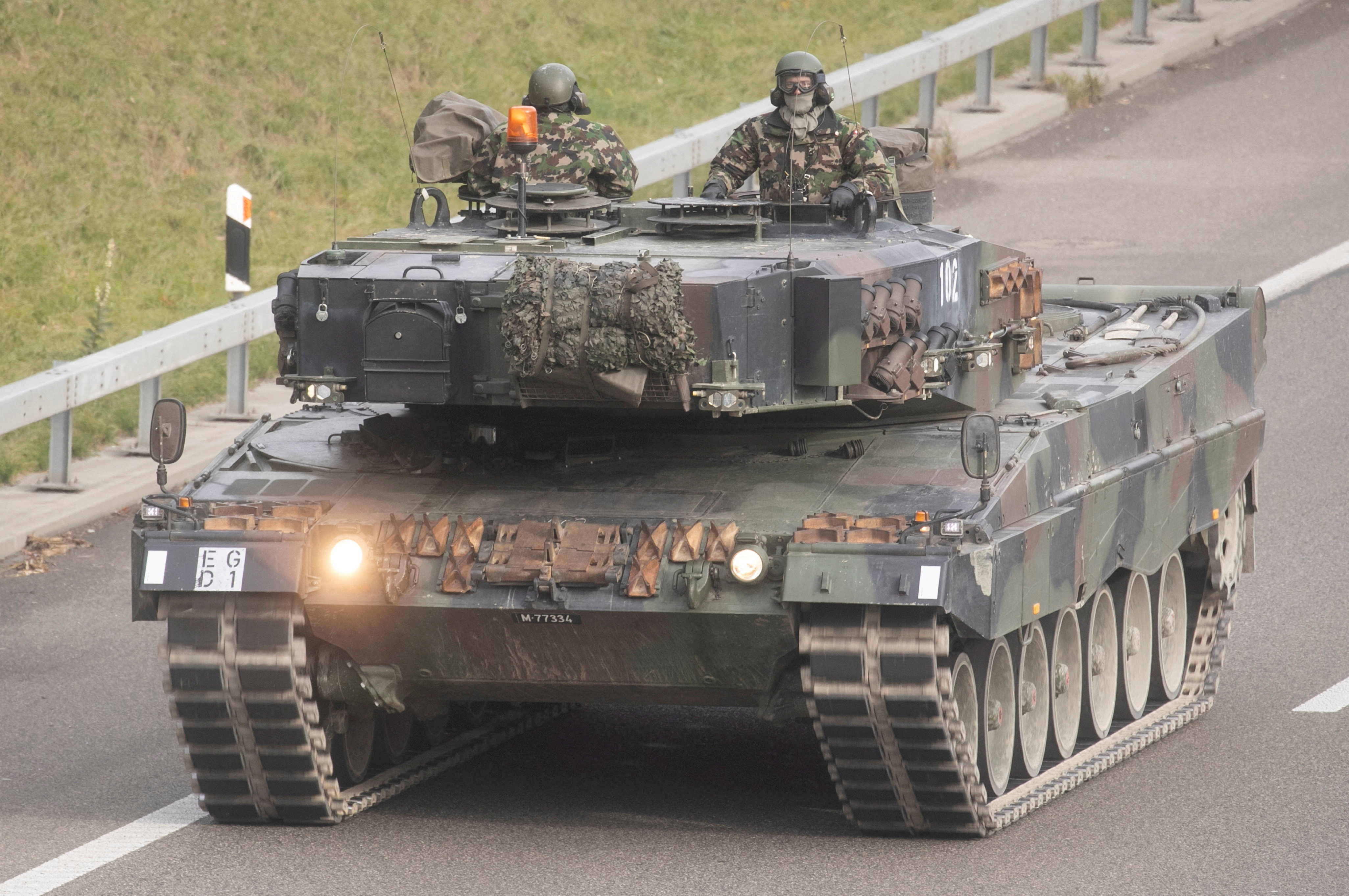 Soldiers of the Swiss Army are seen in a Leopard 2 tank, taking part in the military exercise “Pilum”, as they drive on the A1 motorway near Othmarsingen, Switzerland November 28, 2022. REUTERS/Arnd Wiegmann/File Photo 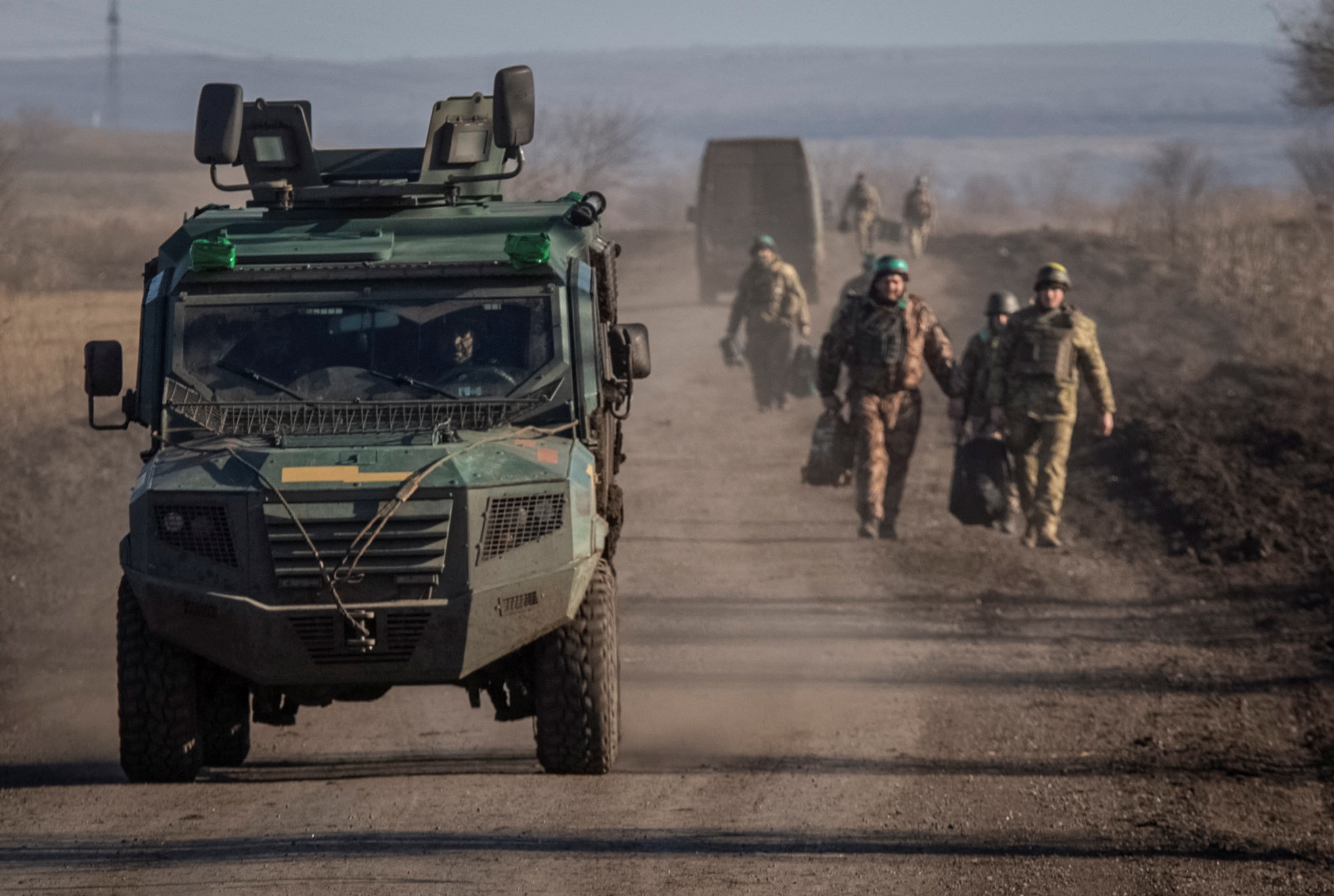 Ukrainian servicemen are seen near the frontline, amid Russia’s attack on Ukraine, near Soledar in Donetsk region, Ukraine January 23, 2023. REUTERS/Oleksandr Ratushniak 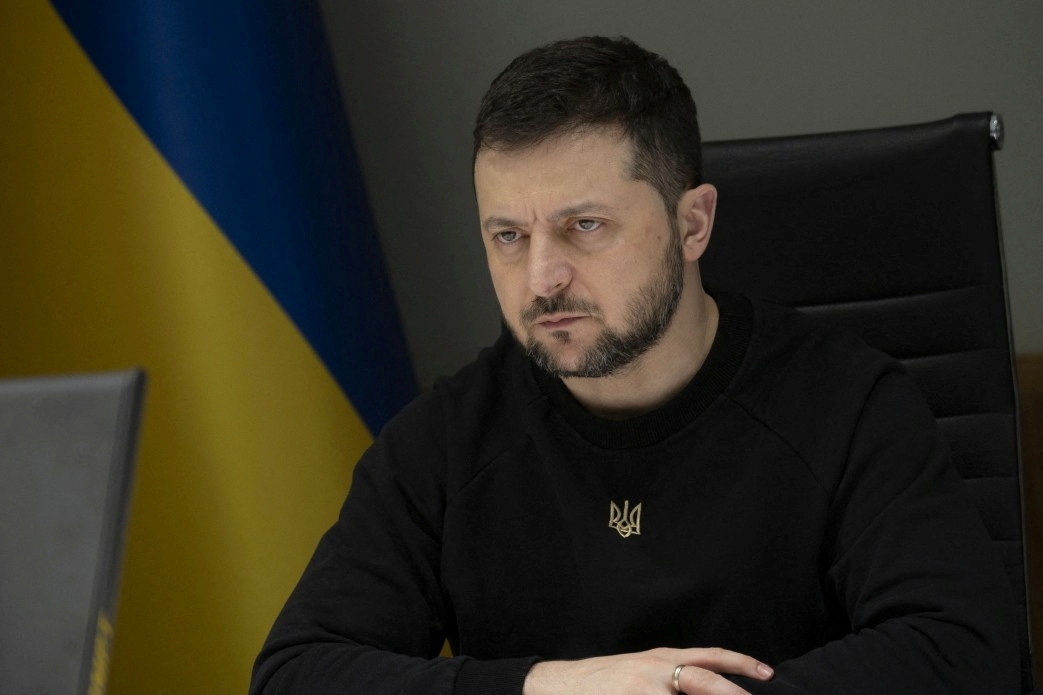 Ukraine’s President Volodymyr Zelenskiy speaks via video link during a meeting of ministers of defence at Ramstein Air Base in Germany to discuss how to help Ukraine defend itself, amid Russia’s attack on Ukraine continues, in Kyiv, Ukraine January 20, 2023. Ukrainian Presidential Press Service/Handout via REUTERS 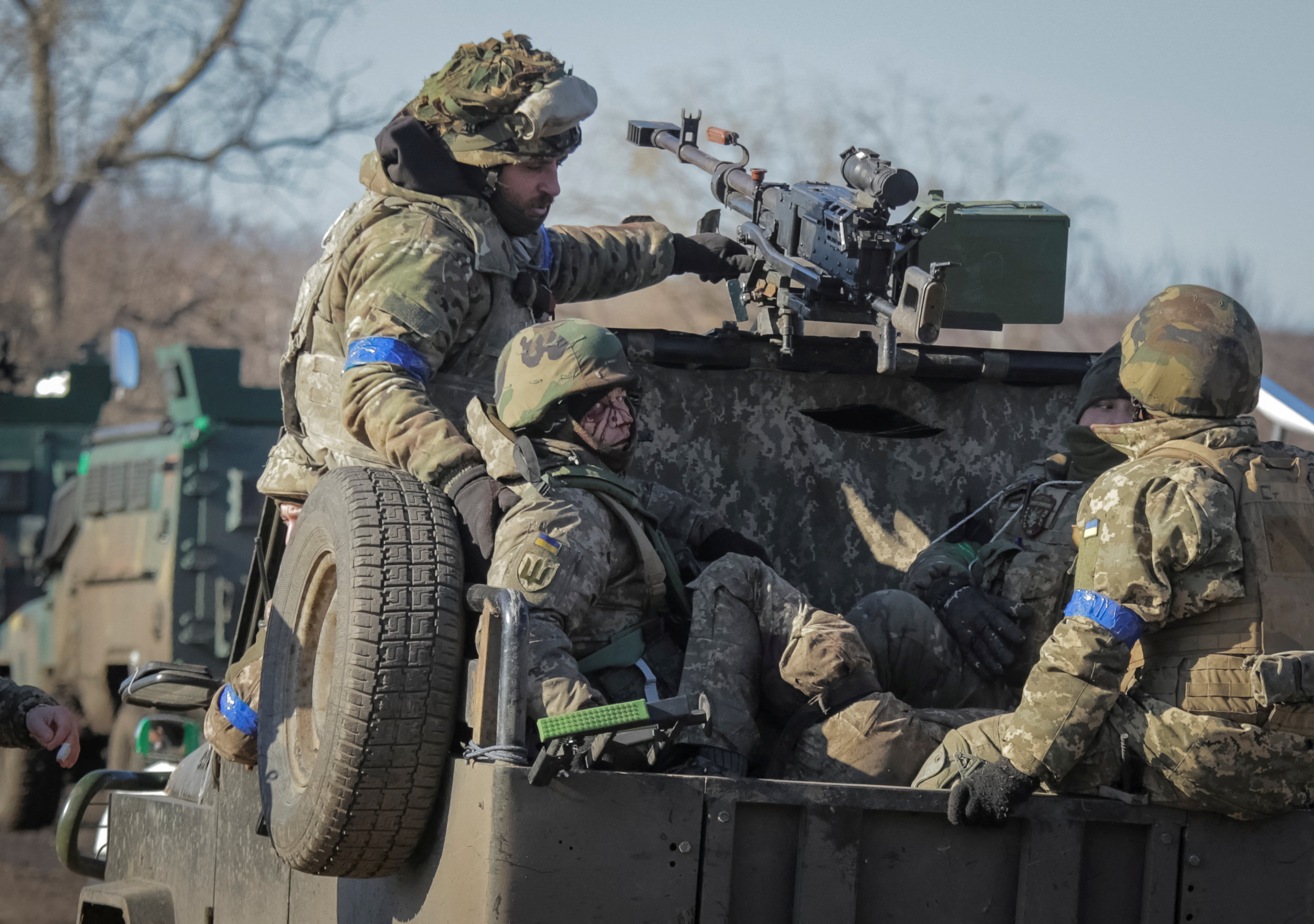 Wounded Ukrainian servicemen are seen during an evacuation, amid Russia’s attack on Ukraine, near Bakhmut in Donetsk region, Ukraine January 23, 2023. REUTERS/Oleksandr Ratushniak 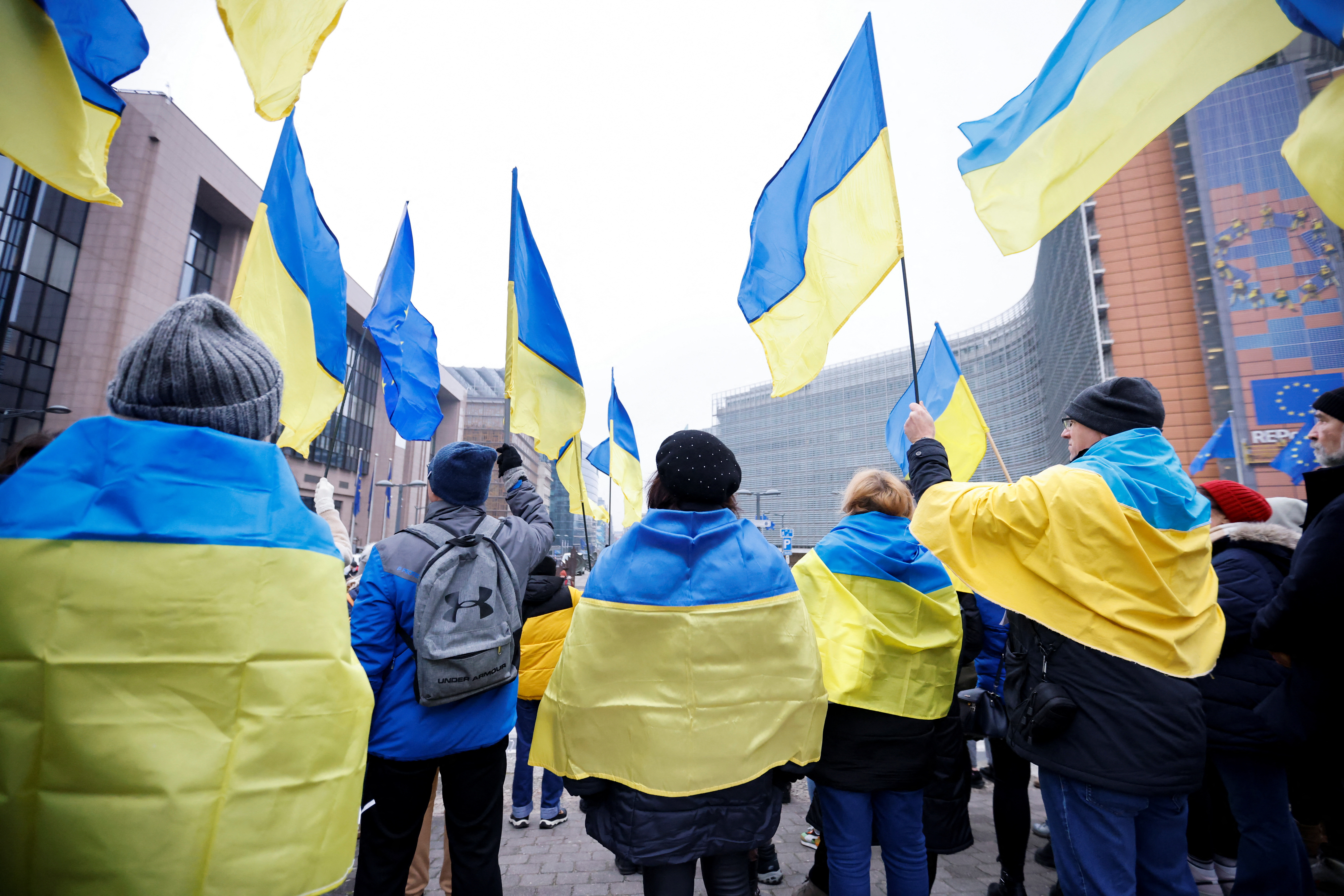 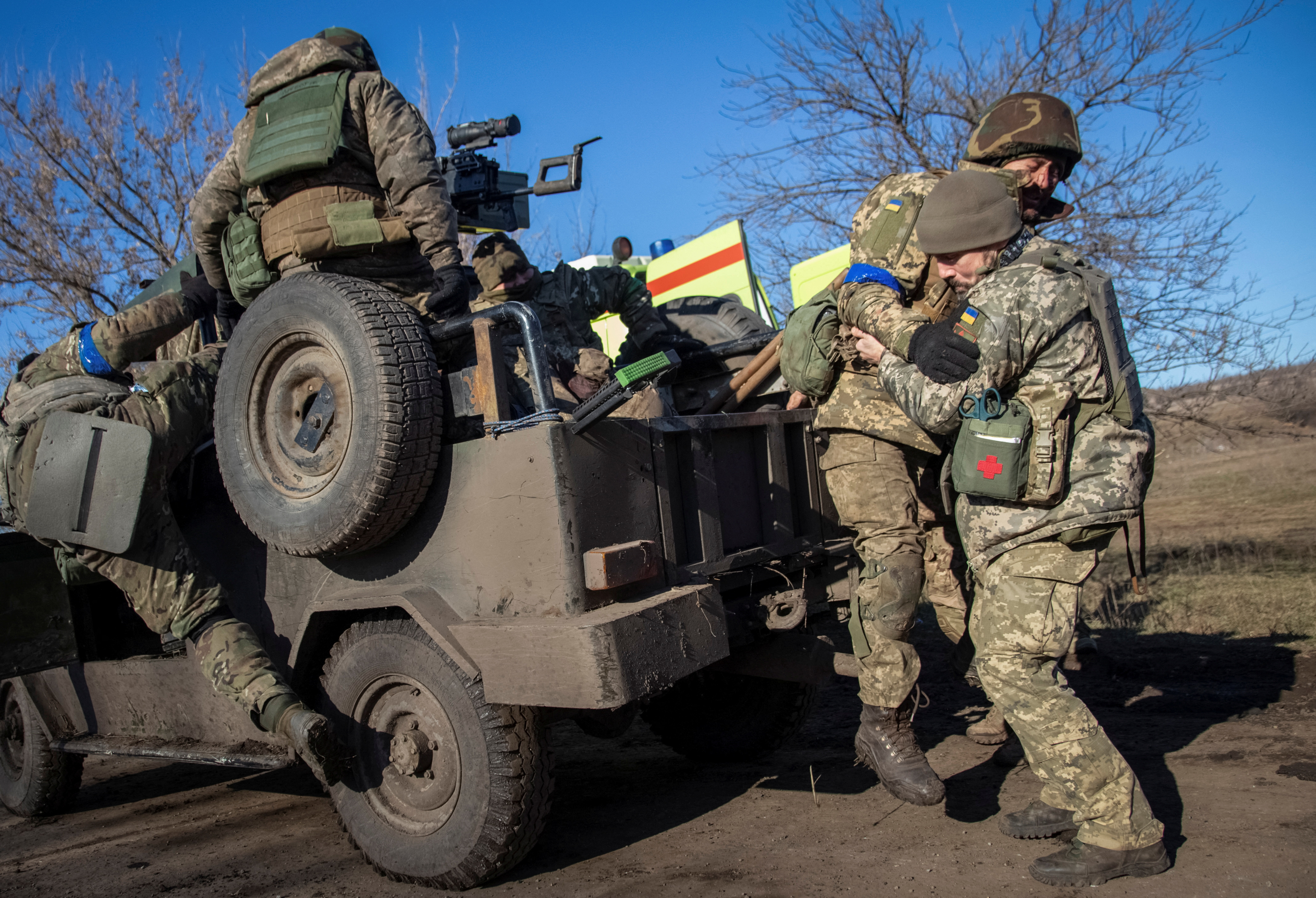 Ukrainian military paramedic attends Ukrainian serviceman who was wounded during shelling at the frontline, amid Russia’s attack on Ukraine, near Bakhmut in Donetsk region, Ukraine January 23, 2023. REUTERS/Oleksandr Ratushniak
Spread the news